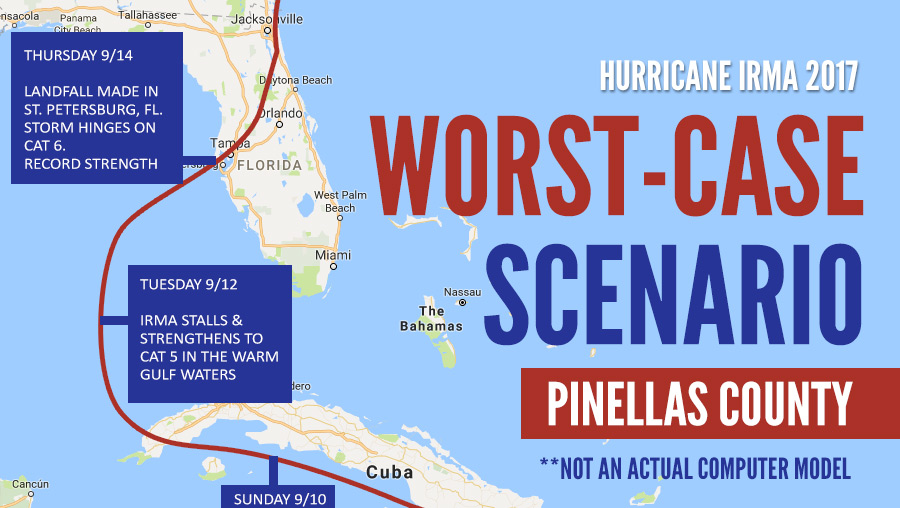 How would this ‘Worst-Case’ Scenario affect the Pinellas County area?

The “Tampa Bay Catastrophic Plan: Project Phoenix”, a worst-case scenario plan developed in 2010 by The Tampa Bay Regional Planning Council and multiple other contributors included FEMA has laid out the following outcomes of a fictitious storm dubbed “Hurricane Pheonix”.

Landfall as the center of the eye hits Indian Rocks Beach at noon.

Storm surge will be reach levels of 11-16 feet above normal tides levels.

Just hours later the surge will rise to over 20 feet.

The three major bridges that connect St. Petersburg to Tampa Bay are now damaged or submerged and no longer passable. **Personal Opinion: Likely closed well before landfall is made.

Cell Phone Infrastructure:
Project Phoenix does not specify a timeframe but does state that the cell phone system will be “barely operational” due to wind and flood damage.

Water
“All water for human and pet use will require boiling.”

Economics:
Including not only Pinellas County but also the surround areas the economic impact could reach $250 billion in losses.

We highly recommend you have a close look at the PDF in the above link as it is very detailed in the exact ramifications of a Category 5 hurricane devastating Pinellas County and the surrounding areas.

Tuesday 9/12: Stalls & Strengthens. Hurricane Irma stalls & strengthens to a Category 5 in the warm waters of the Gulf of Mexico.

Thursday 9/14: Landfall. Landfall is made in St. Petersburg, fl. At this point hurricane Irma hinges on becoming the strongest storm to ever make landfall in the U.S. Severe winds and high flooding could result in massive casualties.

**Disclaimer: This timeline and plot is a hypothetical ‘worst-case’ outcome based on the potential of a series of circumstances culminating in the ‘perfect storm’.

It is highly recommended that you keep a close eye on the professional forecasts for hurricane Irma and plan
accordingly. Do not wait till the last minute to evacuate or prepare food and water for a worst-cast scenario.

**If you have pets please take extra time to consider their needs as in the event of major flooding they may not be able to be rescued with you.

The page you requested could not be found. Try refining your search, or use the navigation above to locate the post.